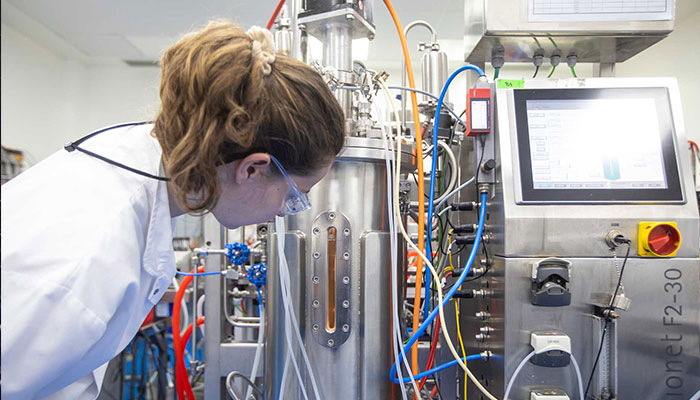 The swift delivery of the world’s first COVID-19 vaccine put a big spotlight on the promise of mRNA technology.

mRNA technology uses non-viral systems and offers a great deal of versatility. Administration of an mRNA into the cytosol of a cell can induce the production of a target protein which can function as an antigen to trigger an immune response for vaccination purposes, replace a defective protein or activate an anti-tumor response.

In this article, we will discuss the mRNA manufacturing process, but first, we have to adress several considerations that must be taken into account for this process.

mRNA development and manufacturing for use in therapeutics and vaccines are comparatively simple, scalable and extremely rapid.

Optimizing and manufacturing mRNA is a multi-step journey, where the appropriate manufacturing quality grade and analytical testing panel must be determined.

mRNA is generally produced by in vitro synthesis, in an enzymatic process called in vitro transcription or IVT, so there is no need to remove cells or host cell proteins in contrast with classical in vivo protein expression.

As mRNA synthesis process uses the same reaction materials and vessels for any target, this allows GMP facilities to switch to a new protein target within a very short period of time, with minimal adaptation to process and formulation.

Production of mRNA-based therapeutics and vaccines typically begins with a pDNA template that contains a DNA-dependent RNA polymerase promoter and the corresponding sequence for the mRNA construct. Given the central role of the pDNA construct, its design and purity are important factors for optimizing the mRNA product.

But pDNA production and purification present several challenges due to the large size of the nucleic acid and its high viscosity, shear sensitivity and the similarities between the pDNA and impurities.

The required pDNA is amplified within bacterial cells, typically E. coli, and subsequent purification steps yields a pure, concentrated, circular pDNA. The pDNA is then linearized to serve as a template for the RNA polymerase. Linearization is required to avoid transcriptional readthrough events that may generate undesired forms of mRNAs leading to additional impurities that would need to be removed.

Impurities such as restriction enzymes, BSA, DNA fragments, endotoxins and others are then removed. Most of the lab scale processes use a solvent extraction technique but this not applicable for GMP production environments. For GMP production, tangential flow filtration (TFF) and chromatography are carried out.

The next step is IVT during which the linearized pDNA, serving as the DNA template, is transcribed into mRNA. This enzymatic reaction uses elements of the natural transcription process, including RNA polymerase and nucleotide triphosphates.

Following transcription, the final mRNA structure requires a 5’ cap structure for stability and efficient transduction in the cell. The cap can be added in two ways – either co-transcriptionally or enzymatically. Co-transcriptional capping is less expensive and faster than enzymatic capping as it is performed during the transcription step, in the same reactor mix. However, efficiency and yield are lower and it can generate non-capped impurities as GTP can bind to the mRNA sequence instead of the cap analogs.

Delivery tools are equally important in the effectiveness of mRNA vaccines and therapeutics. After the final mRNA purification step, the next consideration is the delivery mechanism. The delivery systems can be lipids or polymers and the most advanced class of delivery systems are combinations of booth.

Depending on your final mRNA application and clinical stage, the quality control testing requirements may vary. It is critical that your quality team determine the appropriate testing and specifications for your application and development stage. Some examples of mRNA-specific quality control testing include capping efficiency, poly A tail length, and residual plasmid DNA.

There are several considerations to keep in mind when scaling up the mRNA manufacturing process and these should be on mind during process development.

Partnering with the right CDMO to Advance mRNA Therapeutics

53Biologics offers support and guidance at every step of your custom pDNA or mRNA program.

Our service guarantee a manufacturing supply on time, within budget and following the quality standards of your choice.

Do you have an upcoming pDNA or mRNA manufacturing project?  Contact our team!

The pharmaceutical industry is evolving and 53Biologics is changing in line. PERTE Salud de Vanguardia

We are a #CDMO with wide experience in #biologics production, from DNA to proteins

You have the ability to make a difference to #CloseTheCareGap. For example, you can ensure that healthy and affordable food options 🍽️ are offered at your children’s school or spread awareness 🗣️ like us with this post.

We join the #WorldCancerDay promoted by @ONU_es with the aim of raising awareness and mobilising society to advance in the prevention and control of this disease. From #OLIGOFASTX we work for and with patients.

📅 February is Rare Diseases Awareness Month. The work we do at #OLIGOFASTX not only aims to improve the quality of life of patients with #rarediseases but also to raise awareness about them.🧬

As a trusted #CDMO, we offer a wide range of manufacturing capabilities for recombinant proteins under GMP and non-GMP conditions. We offer customized solutions for #mAbs and recombinant enzymes production with a focus on quality.