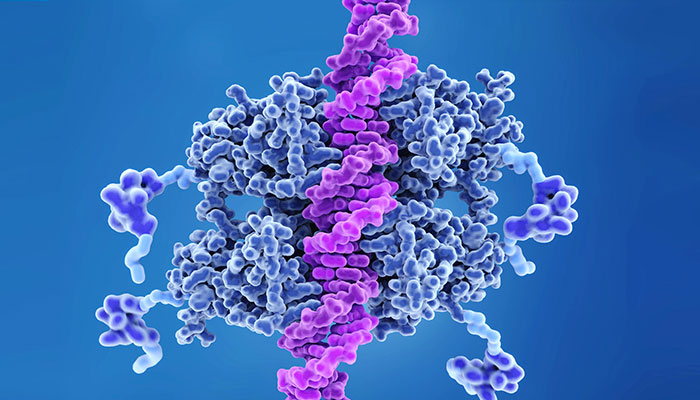 How does protein expression work?

The central dogma in molecular biology is DNA→RNA→Protein.

To synthesize a particular protein DNA must first be transcribed into messenger RNA (mRNA). mRNA can then be translated at the ribosome into a polypeptide, an aminoacids chain that make up the primary structure of proteins. Most proteins are then modified via an array of post-translational modifications including protein folding, formation of disulfide bridges, glycosylation and acetylation to create functional, stable proteins. Protein expression refers to the second step of this process: the synthesis of proteins from mRNA and the addition of post-translational modifications.

Overall, the general strategy for protein expression consists of transfecting cells with your DNA template of choice and allowing these cells to transcribe, translate and modify your protein of interest. Modified proteins can then be extracted from lysed cells through the use of protein tags and separated from contaminants using a variety of purification methods. Deciding which expression system to use depends on several factors:

In this blog post we will summarize some of the more common expression systems including their advantages and caveats to keep in mind before choosing a system.

Mammalian cells are an ideal system for the expression of mammalian proteins that require multiple post-translation modifications for proper protein function.

Some mammalian systems also allow for control over when a protein is expressed through the use of constitutive and inducible promoters. Inducible promoters are extremely useful if a desired protein product is toxic to cells at high concentrations.

However, mammalian expression systems do require demanding cell culture conditions compared to other systems, like longer growth times which affects both the production and also the generation of the strain, media costs, between others.

When one wants to produce vast quantities of protein rapidly and cheaply, a bacterial host cell is almost always the answer. Escherichia coli  is definitely one of the most popular hosts for protein expression with several strains that are specialized for protein expression. Protein expression in bacteria is quite simple; DNA coding for your protein of interest is inserted into a plasmid expression vector that is then transformed into a bacterial cell. Transformed cells propagate, are induced to produce your protein of interest, and then lysed. Protein can then be purified from the cellular debris.

Despite their ease of generation and use, bacteria usually cannot produce functional multi-domain mammalian proteins because bacterial cells are not equipped to add appropriate post-translational modifications. In addition, many proteins produced by bacteria become insoluble, forming inclusion bodies that are difficult to extract without harsh reagents and patience.

Insect cells can also be used to produce complex eukaryotic proteins with the correct post-translational modifications. There are two types of insect expression systems: baculovirus infected and non-lytic insect cells.

Baculovirus expression systems are very powerful for high level recombinant protein expression. These systems enable high expression of very complex, glycosylated proteins that cannot be produced in E. coli or yeast cells. The only problem with baculovirus systems is that the infected host cell is eventually lysed and halts protein production.

Plants provide a cheap and low-tech means of mass expression of recombinant proteins. Many cells from various types of plants such as maize, tobacco, rice, sugarcane, and tubers of potatoes have been used for protein expression.

Plant systems share many of the same features and processing requirements as mammalian cell expression systems, including the majority of complex post-translational modifications. Extraction and purification of recombinant proteins from plants however can be expensive and time consuming as plant tissues themselves are biochemically complex.

To circumvent these issues, scientists have taken advantage of the natural secretion of biochemicals and proteins through plant roots. When they tag recombinant proteins with a naturally secreted plant peptide allows for easier access and purification of a desired protein. Despite being a rather nascent technology, plant cells have been used to express a wide range of proteins including antibodies and pharmaceuticals, specifically interleukins.

Yeasts are a great expression system to generate large quantities of recombinant eukaryotic proteins. Although many species of yeast can be used for protein expression, Pichia pastoris is one of the best.

Pichia pastoris is a methylotroph yeast, that can grow with the simple alcohol methanol as its only source of energy. Thus, Pichia pastoris can easily be grown in cell suspension in reasonably strong methanol solutions that would kill most other micro-organisms, a system that is cheap to set up and maintain.

Another advantage of Pichia pastoris is the ability to secrete extracellularly the protein of interest surrounded by a reduced amount of HCP, reduced fermentation times and media production costs with also a strong portfolio of molecular tools to obtain the desired yields.

In general yeast expression systems are easier and cheaper to work with than mammalian cells, and are often capable of modifying complex proteins unlike bacterial systems. Yeast cells, however, have a slower growth rate than bacterial cells and growing conditions often need to be optimized. Yeast cells are also known for hyperglycosylating proteins which may be an issue depending on your protein of choice.

Fungi are a highly diverse group of microbial species that possess a plethora of biotechnologically useful metabolic and physiological properties. Important enablers for fungal biology studies and their biotechnological use are well-performing gene expression tools. Different types of gene expression tools exist; however, typically they are at best only functional in one or a few closely related species. This has hampered research and development of industrially relevant production systems.

The experience in transferring the fungal productions to large scale facilities, the possibilities to obtain eukaryotic style post-translational modiﬁcations at the same time than prokaryotic advantages (low media costs like bacteria and no need to break cells like yeasts) are boosting their use. However, despite many proof-of-concept studies and several commercially successful cases, the number of end-products that are being produced using commercially viable fungal processes is still low.

53Biologics is a world leader CDMO able to work in parallel with the most promising hosts for each specific case. Contact us!

How to Improve Efficiency in Biopharmaceutical Process Development

Raising awareness about Myotonic Dystrophy (#MD) can be as easy as sharing facts about this #raredesease with your social network.

So… feel free to visit @Arthexbiotech to find out what they are achieving in the searh for a treatment!

📅Every September 15th is International #Myotonic #Dystrophy Awareness Day. From #OLIGOFASTX we support the work that @Arthexbiotech does in the search for treatment for this rare disease.
📌https://oligofastx.com/arthex/

We produce your protein in a variety of #mammalian hosts. During production:

Want to know more? We'll be happy to discuss your Production needs!

💭 How do I select the best #plasmid for my gene?

💭 What kind of testing should be perform to evaluate #pDNA quality?

💭 When do you need to invest in #GMP plasmids?

You may have many doubts about pDNA production, but don't worry, we are here to help: https://bit.ly/3Bq8Pfi

We use our own and third party cookies to analyze our services and show you advertising related to your preferences based on a profile based on your browsing habits (e.g. pages visited). You can get more information and configure your preferences in this link..